On this page you will find entries from recent events that have appeared on our pages in the past.

‘My most sincere thanks go to Rev John Fenn and other collaborators who arranged for a long service certificate to be presented to me to mark my retirement from playing the organ. I have been touched by the many kind and appreciative comments made by friends old and new during the presentation and afterwards. One of my most lasting memories of making music in this church for over thirty years will be the unexpected ending to the service on Good Friday morning. Thank you to everyone present for remaining seated while I played quiet music for meditation by a former organist at Notre Dame, Paris: I was deeply moved by that solemn and spontaneous demonstration of solidarity with the people of that church and city after the devastating fire’.         Godfrey

We had a great response to the launching last Sunday of John Butura's book called " An Escape from Communism to a Prisoner of Christ". The book is a real, honest account of John's life, how he grew up in Romania under a Communist regime. He tells us how he was imprisoned several times for resisting the government and where he discovered how cruel the controlling authorities were. He was determined to leave his homeland and in 1988 he escapes to Austria where he lived in a refugee camp for two years before being accepted for emigration to US. It was while he was there that his life was transformed and he began to heal, both physically and spiritually. The details that he shares with us are almost unbelievable. It could change your life! They will be available after the service price £10.

More news following on from Easter:

The Easter breakfast was lovely! Thank you to the early risers who came in and got everything laid out and cooked.

On the Tuesday of Holy Week, it was Messy Easter!

There were 46 children and adults taking part in a range of activities to do with Easter. They made …..

They finished with jacket potatoes and fillings, and jelly and icecream. They all had a whale of a time, so again, thanks are due to Anne and her team for all the preparation they do to make such events so successful.

Sri Lanka is the birthplace of the Vice-President of Conference, Bala Gnanapragasam. This is a link  to a prayer for the people of Sri Lanka, and the full statement from the President and Vice-President, which is in the leadership blog on the connexional website.

Marion and Graham would like to say thank you to everyone who helped celebrate their Golden Wedding Anniversary with cards, flowers and gifts. We have been delighted to send £450 to Action for Children.

The Lenten lunches have raised over £800 for Christian Aid

Please remember in your prayers this week the people of Paris, so distressed by the devastating fire at Notre Dame de Paris.

The journey of the palm crosses

Masasi is one of the six districts of the Mtwara region of Tanzania.

They are grown, harvested, woven and distributed as part of a  self-help programme in eight villages in one of the poorest regions of Southern Tanzania.

The nine Churches Together in North Walsham, have signed a local covenant, committing themselves to work together. 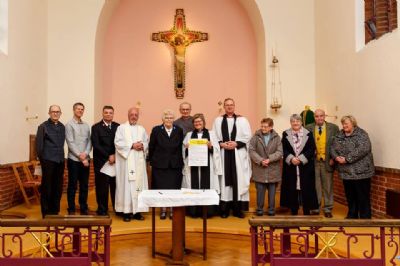 The work of Churches Together in North Walsham, and the nine local churches which last week signed the local covenant, committing ourselves to work together.

After the all age worship on Sunday 16th December, there will be a bring and share Christmas party for everyone. This is even more exciting, but may seem slightly more complicated, than the usual church lunch. Please sign the list if you are intending to come and please also put your name into the ‘Secret Santa Postbox’. The box will be opened on Sunday 9th, during the coffee, and you will be able to draw a name to shop for. Then the next week, you’ll bring your ‘to share’ dish and a wrapped present for the person whose name you drew. This is to be a small token present - we have put a maximum limit of £3.00 on your shopping. (The children’s ages will be recorded to assist your shopping: adults do not need to specify their ages.) This is a new idea from the lunch team, to invite everyone to the party, not just the children and young people, to build on the success of the church lunches.

The circuit plan and the three monthly overview of all the church rotas are now available in the Church Centre. The rotas are now on a separate sheet, and in a memorable colour.

This year, we have filled shoeboxes for the charity Link to Hope. More information about this charity and its work can be found on its website - click on Link to Hope to open it in another window

On October 14th, we celebrated the 128th anniversary of the dedication of the present church building on 19th October 1890.  (The lounge and Dayspring Centre are later 20th Century developments).   However, the ‘people called Methodist’ in North Walsham are heirs to the legacy of a local grocer, Richard Colls, who in 1797, only six years after the death of John Wesley, applied for a licence to use a building somewhere in the town for ‘Methodist’ meetings – precisely where is not now known.  We must therefore give thanks for 221 years of Methodist witness in North Walsham and for all the people who have contributed to it down the years.

The last few copies of the book ‘Welcome in this Place’, published in 2015 as a brief guide to the history of this church, its people and to the memorials and furnishings to be found here, were sold.

Many thanks to everyone who responded to the Gift Day appeal last month. The total amount raised for church funds was £3,972.00. A very gratifying achievement!

A Note from the Rev’d Gordon Webster

Last Sunday, (7th October) I invited you to write your prayer responses for children and youngsters.

Requests were placed with the Collection as part of what we offered to God in worship.

- Personal concerns for individuals – families, friends etc.
- Young people in our Church and in various youth organisations such as Scouts and Guides, Boys and Girls Brigades
- Children’s charities such as Action for Children, Save the Children, UNICEF
- Orphans and children in war zones such as Syria
- Victims of the Indonesian earthquake and tsunami
- Street children in Columbia and their helpers
- Children and families who have had to migrate and become refugees
- Vulnerable youngsters enslaved by drug barons
- Children and Family Centres under threat from government cuts
- Youngsters with mental health problems and children with cancer....

Thanks for such a tremendous response!  KEEP PRAYING!!

Back to North Walsham Home