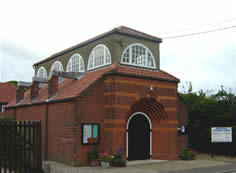 We hold a regular Coffee Morning on Thursdays
from June to the end of September from 10 a.m. - 12 noon.

Overstrand chapel was opened in 1898, built on a plot of land donated by Lord and Lady Battersea owners of the nearby Pleasaunce, their country home. Both the Pleasaunce and the chapel were designed by the eminent Edwardian architect Edwin Lutyens.
Now a listed building it was said that Lutyens based it's design on a fishing boat shed in Littlehampton and there was a passing similarity to the original lifeboat house on Cromer pier. Despite a lack of groundfloor windows a clerestory supported by external piers floods light to a typically plain interior. It is the main entrance, however, with it's elaborate and intricate brick arches and decorative features that is the chapel's true architectural glory. Visited and commented on by Pevsner it is now recognised as one of East Anglia's first buildings in the Modernist style.